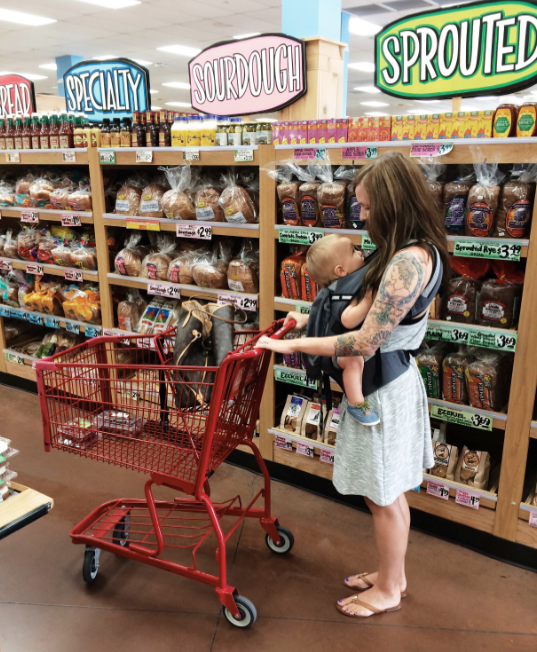 I see scary carseat/shopping cart situations all the time. I know you must see it too. Perhaps you’re even in the habit of placing your baby’s carseat on top of the cart when you’re shopping.

Way back in the late 90’s when my oldest son was a toddler, I saw a woman’s baby fall off the cart at the drug store. I can still remember the sound that kid’s head made when it hit the floor. She scooped him up and ran out with him while the store manager ran out after her. I don’t know what happened after that but I remember being horrified by what I had just seen (and heard). That experience stayed with me and from that day on I have always been super-conscious about how my kids were secured in shopping carts. However, I am obviously in the minority because far too often I witness dangerous shopping cart situations. Sometimes I’ll say something – in the nicest way I can, of course. But giving unsolicited advice to strangers can be more dangerous than playing in New Delhi traffic, so usually I just keep my mouth shut. But here’s why it’s such a concern and what you can do to reduce the risk of your baby being seriously injured in a fall off the cart.

The problem: Infant carseats just aren’t designed to be secured to the top of a shopping cart.

Most carseat manufacturers specifically prohibit using their seats this way but that warning is usually buried along with 30 other generic warnings in the instruction manual so it doesn’t get much attention.

According to the AAP (American Academy of Pediatrics):

It is more common than most people think for children to be hurt in shopping carts. These injuries can be severe or even deadly. Each year approximately 23,000 children are treated in hospital emergency departments for injuries from shopping carts. Most injuries are caused by falls from the cart or by the cart tipping over. Many injuries are to the head and neck.

Unfortunately, we’re a monkey-see, monkey-do society; so many parents think this is a perfectly acceptable practice. The issue is that the carseat isn’t strapped in or snapped onto the cart. It’s just perched on top. Sometimes it’s perched in a way that’s fairly stable but more often than not, it’s just teetering on the top with little support. One good bump and that seat (with baby inside) is going to topple. If the baby is old enough to kick, grab or try to sit up – that increases the chances of falling. If the child is old enough to kick, grab or try to sit up and the harness straps are loose, or worse yet – not buckled at all, that greatly increases the chances of a fall. And if you have a preschooler shopping with you – the chances of baby toppling off the cart just increased ten-fold. In case you haven’t noticed, little kids like to push the cart, and climb on it, and hang off the sides as soon as you turn your back. The cart isn’t the most stable object on four wheels to begin with, so adding a toddler or preschooler into the equation can be a recipe for disaster.

The Easy Solution: Don’t do it.

The Reality Check: You can’t avoid going to stores completely and you need a safe and convenient place to put your baby or toddler so you can get stuff done.

Here are some suggestions for making a trip to the store a little less hazardous for your child:

• Use an Ergobaby baby carrier and leave the infant carseat in the car.

• If you decide to bring your infant carseat into the store with you, place the infant carseat in the main portion of the cart and drag an extra cart around with you if you need to do a big grocery shopping. I’ve been there done that so I know what a pain in the rear this is – but it’s doable. And it certainly beats a trip to the ER where you’ll have a lot of explaining to do while they examine your baby for serious head and neck injuries.

• Take advantage of stores with carts that have built-in infant carriers. Just remember to buckle your baby in nice and snug. And I highly suggest a receiving blanket to cover the surface before putting your baby down.

• Use common sense! If the carseat is poorly supported on the cart, don’t leave it that way! Nothing you’re going to buy at Costco or Target or ShopRite is worth risking your child falling off the cart face first.

This post originally appeared here on Carseatblog.com and was re-posted with permission.

Kecia Healy is a mom of 2 boys, a Child Passenger Safety
Technician-Instructor and one of the primary authors of
CarseatBlog.com. She lives with her husband and children in the
suburbs of New York City.

The Gift That Gives Back