Five Reasons to Wear Your Baby 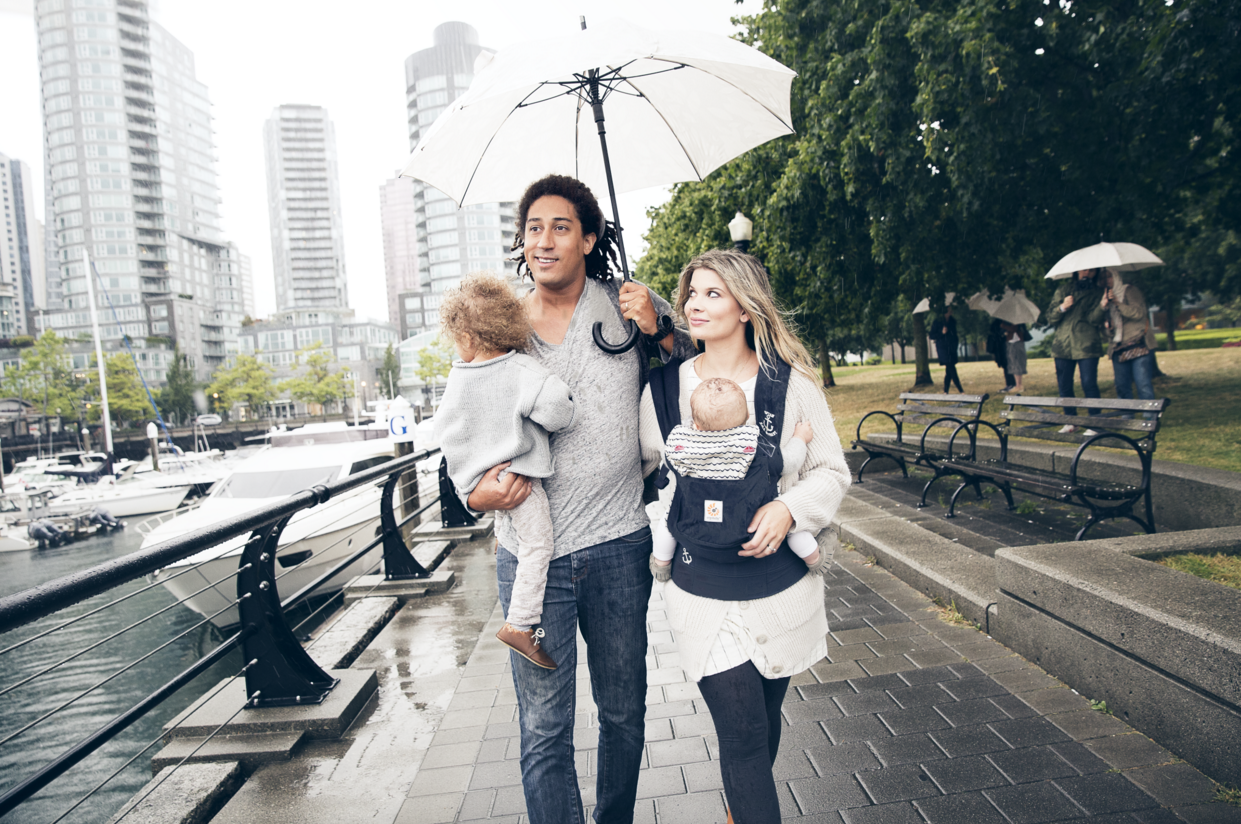 It seems that in many Western societies, one of the first things people do when they find out they’re expecting is to look at strollers, baby carriers, bassinets, anything that will hold your child for you.  Yet, most people don’t realize that there is another way to keep your little ones with you, a way that is far superior in many regards and will also be much cheaper: babywearing.

Historically, and in many other cultures today, strollers and other baby carrying gadgets are simply not used.  Babies are wrapped and strapped to their caregiver to get around when their own two legs can’t take them.  Though some might argue that there’s no difference, or that our modern inventions are more convenient, I would like to argue that there are actually good reasons to wear your baby.  So here I present what I believe to be are five of the best reasons to wear your baby…

Sadly, infants and children are not receiving the amount of touch they need to thrive.  Touch is our oldest and largest form of communication[1][2] and we tell our infants so much by our touch, or lack thereof.  Not only can it share emotional communications, touch also regulates stress and arousals, something infants need help with in their early days[1][3][4].  But in our society of gadgets to hold your baby, the average baby is only touched about 12-20% of the time and decreases to 10% by the time children reach 1 year of age[5].  Compare this to hunter-gatherer societies where the time an infant was held was upward of 95%[5].

Babywearing can change this.  Not only does it replace stroller time, but can also replace all those other gadgets people buy to hold their babies, such as bouncy chairs or activity centers.  Although people have started babywearing more and more when they go out (yeah!), it can also be done indoors while doing chores, reading, watching tv, working, cooking, etc.  In fact, there is really no reason your baby can’t be touching you the entire time you’re awake (okay, minus diaper changes).  If you figure the average adult is awake 16 hours a day, that’s 66% of the time that an infant can receive touch, a HUGE improvement over what our babies are currently getting.

Reason #2: Babywearing is actually easier (and you get more of a workout)

Let’s face it, when you’re out and about, pushing a huge thing around with a tiny infant inside is not easy.  Most strollers make getting in and out of doors a real pain in the you-know-what and don’t even think about trying to get on the bus.  I know people argue that you can carry packages in the stroller so you can do shopping, but guess what?  You can do that while babywearing too.  With your hands free, you can carry bags, or use a backpack, or bring a portable shopping bag on wheels.  And if you’re carrying the bags and baby, you’re definitely getting a better workout than using a stroller.

I’ll be honest – we bought a stroller and my daughter sat in it for a whopping 5 minutes one time.  Other than that, she’s never used it (and we later sold it).  She has always been worn until she could walk and even now she’ll sometimes hop in the Ergo on my back.  It is easy.  I got shopping done, errands run, took the bus without taking up five seats, and all the while my little girl was happily snuggled close to me.  And you know what else was easier?  Breastfeeding.  We very quickly got used to nursing on the go and with my girl snuggled right up at my chest, it was very easy to nurse and walk at the same time, meaning I didn’t have to take breaks or find a place to sit down before I could feed her.  This meant my daughter barely ever cried while she was on me and that made things easier for everyone.

Reason #3: Babywearing can improve the bond between parent and child

As parents, one of the things we strive to ensure is that we develop a deep and positive bond with our children.  We hope this because we know how important a secure and stable relationship is for a child.  And amazingly, one of the ways we can do this is babywearing.  Usually it’s hard to disentangle the effects of parenting practices on child or parent-child outcomes because people self-select into their own groups without controlling for a lot of other variables (which is done though), but with babywearing, there actually is experimental research on its positive effects on bonding.

In a study looking at mother-infant dyads[6], researchers randomly assigned half the group to receive an infant seat at birth for their child while the other half received a soft infant carrier.  Importantly, parents used it only as they saw fit and nothing stopped the control group from using a carrier if they had one, meaning the results would most likely be on the conservative side (i.e., we would be more likely to see no difference between the groups).  Yet, at 3 ½ months, mothers who were given the soft structured carrier were significantly more responsive to their infants’ vocalizations and at 13 months the children were significantly more likely to be securely attached to their mothers.  Not bad for a bit of cloth.

Congruent with this, Darcia Narvaez from the University of Notre Dame has done work looking at the factors that influence infant and child well-being and has found that, coupled with methods like co-sleeping and full-term breastfeeding, babywearing contributes to positive infant brain development[7].  These results related to reason #1 to babywear – touch – as it is this contact that helps shape development and mother-infant bonding.

Why do people care about tummy time?  It’s actually not random or superfluous.  Tummy time helps infants learn to move their head up and from side to side.  Why does this matter?  Because it can help them avoid suffocation if they find themselves in a prone position[8].  When infants were put to sleep on their stomachs (or prone), they built up neck and stomach and arm strength much faster, though it had the unintended effect of increases SIDS risk.  However, as infants now sleep on their back and spend the majority of their time on their back, they don’t get to work their neck and stomach muscles which are used to help them if they ever find themselves in an undesirable and dangerous position.  Hence, tummy time.

However, most infants don’t enjoy tummy time and it’s something parents have to force.  Except they don’t.  Babywearing works the same muscles and allows the same benefits as tummy time.  An infant in an upright carrier is able to work on moving his or her neck while building up the muscles, and just having to remain upright (even while supported) builds the stomach muscles.  There is no tummy time in many cultures but it’s also not needed as the infants get ample time building necessary strength while being worn.  My personal experience was of a infant that hated tummy time so we never did it, but she could hold her head up on own (briefly, for her passport picture) at a month.  And even now I’m shocked (and jealous) of how strong her core is.

Reason #5: Babywearing can help you see the world as your child does

Babywearing can improve the bond between parent and child, but it goes further.  When you walk around with your child that close to you, you learn to see the world as they do – and it’s magical.  I wrote about my own experience of this here, but in short, it awakens you to the things that capture your child’s attention and even allows you to become a child of sorts again.  Imagine seeing leaves for the first time as they come into bloom in the spring.  Or a digger doing construction.  I can tell you that it’s honestly fascinating if we allow ourselves the chance to sit back and discover the world anew.

But it goes beyond that.  Because to honestly spend time with others is to learn to take their perspective when looking at the world.  And that is key to parenting and relationships more generally.  Perspective-taking allows for greater empathy[9][10] and our own levels of empathy and responsiveness are related to the development of empathy in our own children (for a review, see [11]).  This isn’t to say you won’t be able to take the perspective of your child if you don’t babywear, but it just makes the process that much easier.  This is probably one of the reasons why we see greater instances of secure attachment in families where babywearing is done[6].

At the end of the day, it’s up to each family to decide what works best for them.  But with all the benefits of babywearing – including the very basic cost difference compared to a stroller – why wouldn’t you try it?  You don’t have to do it all the time, but babywearing even occasionally will confer many of the benefits listed here.  And those are all good things.  So grab whatever it is that is most comfortable for you and spend that extra bit of time touching your child.  You will both be thankful for it.

Tracy Cassels obtained her B.A. in Cognitive Science from the University of California, Berkeley, M.A. in Clinical Psychology at the University of British Columbia, and is currently a Ph.D. Candidate in Developmental Psychology. Most importantly, though, she is a mother to daughter Maddy, stepson Desmond, and wife to husband Brian. She can be found at her website, Evolutionary Parenting.

Where Will We Go Today?

Stowaway on A Little Bit of All of It (and a Giveaway!)