I’m on the phone with Sarah Beaufait, a powerhouse mom of 4 in Midland, Texas, telling her about a game a friend once played at a baby shower. The game required participants to do a series of things with one hand tied behind their back. Including opening a pack of diapers. “Oh, that’s easy,” scoffs Sarah without a pause. Which is perfectly in keeping with her can-do, funny, down-to-earth way of looking at life. And her Ergobaby carrier is the ideal assistant.

It was with kid number two, so 6 years ago. I have four kids: My oldest, Luke, is 7 and a half. And then Gifford is 6. Lydia is 4 and Ben, my youngest, is 1 and a half. It’s a little busy sometimes. [laughs] Once kid number two comes along, you’re pulled in multiple directions, so that’s when I got the Ergo. I had a friend who used one all the time and she loved it. I saw her and I was like, Oh man, that looks so much easier than trying to carry a baby and chase a toddler. So I bought it myself.

What made your Ergobaby “the one”?

It was more comfortable. I tried other carriers and they always hurt my back. I’m very tall, 6 feet, and I think [other carriers] are made more for, you know, average-sized people. And my friend with the Ergo, she’s tall like me and she was like, “You should try this one!” And it’s worked great. Ben probably weighs 25 to 28 pounds and he’s not mobile, so I’m still carrying him.

We use the Ergo more on trips because Midland is not a very pedestrian-friendly town. When Ben was younger, I would stick him in the Ergo at the store because he was too little to sit in the cart. And now we use it when we travel. We were in Santa Fe recently, and they had gotten a lot of snow, so it was perfect. We could trudge around, have a snowball fight. We’ve been to Colorado and used it. Sam’s parents live on the coast in Texas, and the Ergo works really well at the aquarium there.

Any especially funny situations in which you used your Ergo?

When we were in Santa Fe, we went to Meow Wolf, which is this crazy, wacky museum. And you can’t take a stroller in it. So luckily I had the Ergo, because in some areas you’re on your hands and knees crawling. I was crawling through tunnels, climbing through refrigerators. I mean, I couldn’t imagine not having the Ergo in that place! The other thing I really like about the Ergo is that Ben can sit facing out or in (we have a 360). Usually, now that he’s bigger, I keep him facing out, but he got so overstimulated at Meow Wolf. It was easy to flip him around so he was facing me, and it was a lot more comforting for him. 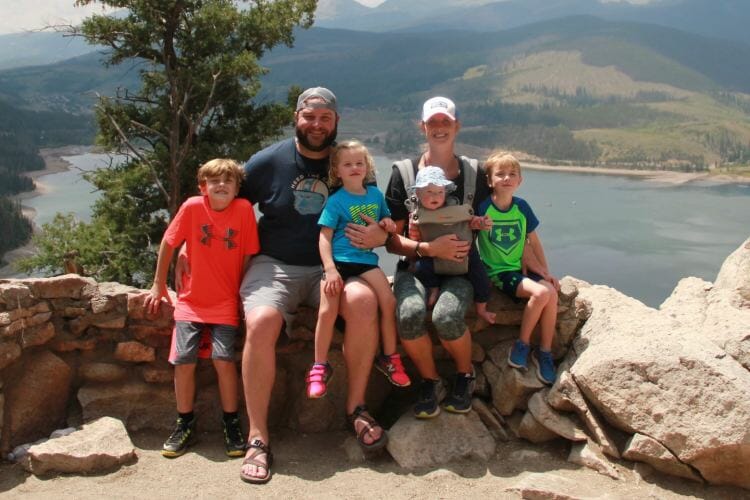 Yeah, he likes it a lot. Ben has Down Syndrome (DS), so for him, it makes him feel like he’s still part of the group. Facing him out, he can see everybody; everybody interacts with him and he can interact with them. And I can also flip him around and give him that sense of security. Also, children with DS suffer from low muscle tone, so their hips can get displayed very easily. It’s one of things I love about the Ergo for children with DS: it doesn’t splay their hips. The flaps underneath where the carrier holds his legs, I can fold them in and make it a lot more narrow. As a mother having a child with health and gross motor issues, it just gives me peace of mind, knowing that I’m not doing anything to hurt him or prevent him from being able to walk or anything like that.

[NOTE FROM ERGOBABY: When baby is facing parent in the 360, the recommended setting is the wider setting (black buttons), because it provides a better seat for baby. However, when baby faces out, the seat should be narrowed (grey buttons) and shouldn’t be on the wider setting. “Grey faces away.”]

I feel like an octopus with eight arms. I can do things with more than one hand, you know?

Yeah! It’s amazing as a mom what you can do with just one hand. But now all of a sudden, you have two! You really feel like you can do anything at all.

When I had my first child, I was so stuck on a schedule. I breastfed all of mine and it was like, “OK, it’s time for me to feed the baby. No one interrupt me!” I think it’s helpful just being a little bit more easygoing, more go with the flow. And the Ergo helps you do that. Like, it’s Baby’s naptime, but you really have to go do this, so stick him in the Ergo, let him nap in the Ergo. It’s ok to loosen up a little bit.

The joys can be found in the smallest and biggest moments, from holding your baby for the first time, sweet snuggles, laughter, tears, first steps, the funny things they say, learning to read. The biggest joy of all, though, is having our sweet Ben in the family because he has taught all of us so much about love, acceptance and kindness. It brings me so much happiness knowing the kind of individuals my kids will grow up to be by having a sibling with special needs.

Parenthood feels like a job on days when things just don’t seem to be going your way, when the kids are constantly fighting or whining or not listening. It can be incredibly frustrating because as a mom, you’re on call 24/7.

I’ll probably hand it down to a friend who’s having her first baby. I’ll tell her how much we used it and all the benefits of it. Because I know it can be put to good use. And Ergos hold up so well. Mine’s still in really good shape, and it looks good too. You know, there are some things that a friend will give you as a hand-me-down and you’re like, “Ohhh, thanks a lot,” and it goes in the Goodwill box. But this one, I really feel they’ll be like, “Yeah, sure, I’ll use that!”

We Want Your Ergobaby Love Story