Three of my favorite things about writer and mama extraordinaire Rebecca Woolf: She is wickedly funny. She will never judge you for giving your kids Goldfish for dinner. She is so good at honoring that exactly who she is is exactly enough. Here, she shares how life with four kids (including twins) made her a big Ergobaby fan.

My daughter was born in 2008, and that was the first time I ever used an Ergo. It was a hand-me-down. After that, all I used was the Ergo.

How long did you end up using it?

I had one Ergo for five years. So I actually had three Ergos in all. Two of them, I gave away to this amazing organization called Carry the Future that helps refugee families. But I haven’t been able to part with the one that I had with all my babies. It was faded. It had been through every sort of poop and throw up accident. It was so lived in and it felt important to keep it, you know? [Laughs]

Where did you and your family go in your Ergo?

So I would usually push one of the twins in the stroller and carry one of them. I’d switch the babies back and forth and they’d take turns napping, and that was basically how I did twins. Every weekend we would do Family Adventure Day, so we would go to a museum or a garden. [The family live in Los Angeles.] Occasionally on a hike, I would wear one twin; my husband would wear the other. We brought the Ergo every time we travelled, obviously. I literally wore a carrier for five years straight. Like, every single day. 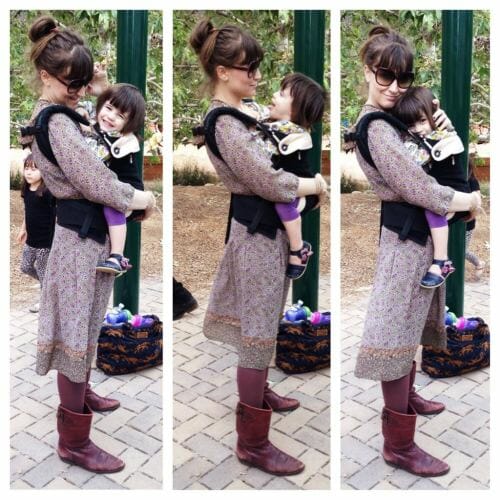 I just loved…I miss that feeling when they’re all bundled up and asleep. Like when you’re walking around, trying to get them to nap and you keep checking. You open up the little top thing and you look in and see an eye, and you close it back up and you keep doing the dance. And then you feel the weight get heavier and you peek back in and the eyes are closed. That was the best feeling. Then you have that sweaty face against your chest and you don’t know where your sweat ends and theirs begins. I remember the feeling of my arm around the Ergo, hugging the sleeping baby and ah! [Sighs] It was just such a great feeling.

That dance became so soothing for me, too.

Maybe I’m tired? [Laughs] For being in use 24/7. Or give me a bath? Cause always it was, like, disgusting. And washing the Ergo was like, I have to part with it for an hour and a half! Only if there was a real serious situation did I wash it. Otherwise I would just wipe it down with a wet wipe and be good to go again.

How old is everybody these days?

So my son is about to be 14, which is crazy to me because he was just born and I was just 14 and this doesn’t make sense. And then Fable, my oldest daughter, is 10 and my twins are 7.

Try not to listen to anybody. I feel really strongly against baby and parenting books. We learn so much more from listening to our baby, listening to ourselves and having real, authentic connections with people who are going through the same things we are. Surround yourself with people you can trust to confide in. It’s so good whenever we can tune out all the noise telling us how and why and what to buy. And also, babies really don’t need that much. It always came down to my four things: you need a good carrier, a good sound machine, something to feed them with, and something to put on their butts. That’s really all you need!

The last time we talked, I was about to have my second daughter and I was freaking out because we didn’t even have diapers. You were like, “You can get diapers on the way home from the hospital.”

Totally! I remember freaking out about the overnight bag. No one ever touches the overnight bag. All the weird sh— that I brought to the hospital, I never used any of it. I had birth mixes for all of them. Like I’m going to reach for my birth mix. In labor, “Let me just put on this CD.”

The hardest thing for me about parenting has always been the lack of sleep. And also preparing meals. Even now, making lunches is my least favorite thing. Everything else is pretty great, I have to say. I mean, I know parenting…it’s hard, obviously. But anything that felt like too much work, I just stopped doing. I didn’t breastfeed, or I did in a very limited run. I never took my kids anywhere that felt overwhelming to me. I don’t put pressure on myself to be perfect. I don’t put pressure on myself to be anything other than the best I can be for each kid. And I fail all the time and I’m super fine with it. I think the blessing of having so many kids is that you cut yourself a lot more slack. Because you don’t have a choice. I can’t be at everything for everybody. And in a way it’s this sort of relief. I’ve become, like, the opposite of the helicopter parent.

Yeah, the submarine parent’s good. “You guys go on, I’ll just be down here under the sea.” [Laughs]

So often the parents I admire, it turns out they have three kids, four…. They’re just so chill.

It’s so true. And also twin parents. I can always tell a twin parent. They’ve given up so long ago, they’re like, “You know what?” Their kids’ clothes are inside out; they’re eating Goldfish for dinner. And you do that. You can’t—you just can’t. Period.

Where is your retired Ergo these days?

It’s in my bin full of baby things that I wanted to keep. It’s so funny because I’m always like, I’ll save this for my kids. And I’m so sure. Because by then babies will be in, like, some sort of hovercraft or some crazy thing. And here I’ll be [brightly], “Here’s your Ergo from the early 2000s!” But my hope is that it will live on in other generations. 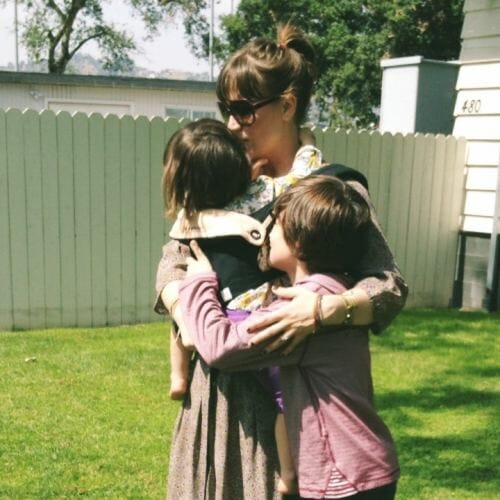 I think of it in two parts. The first is: The Ergo allowed me to thrive. And the second is: We held each other close. Because it feels like you’re holding your babies but, since the Ergo is hands free, it also feels like they’re holding you. So there’s this beautiful sort of metaphor for what it means to be a parent. You think you’re carrying them. But from the moment my children were born, I’ve always felt like they were holding me. There was a real power in that for me. I felt like I was in their arms as much as they were in mine.

How Do I Nurse in the Omni 360 Baby Carrier?