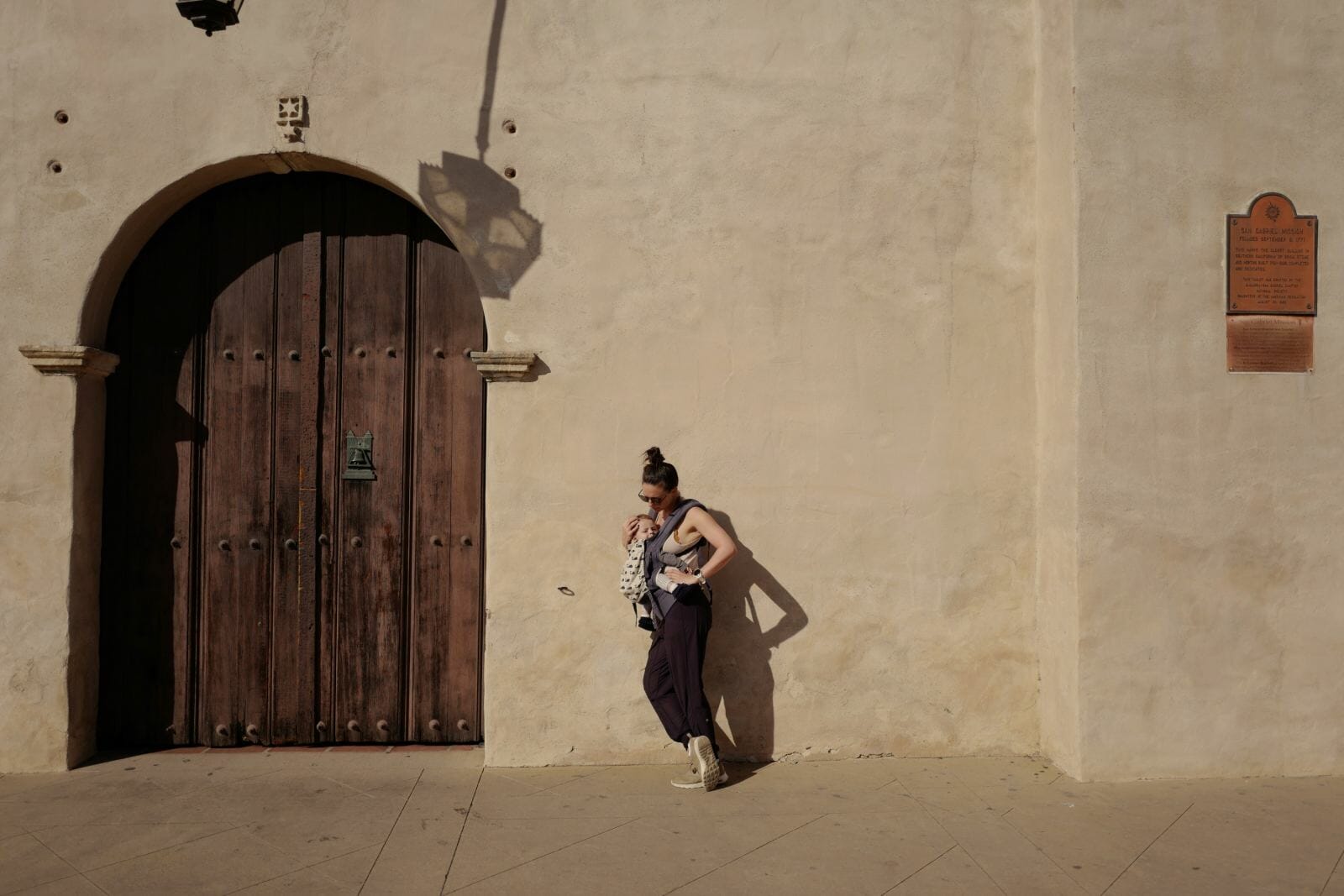 You know those moms who exude effortless cool? Los Angeles-based designer Laura ODell is one of them. Whether she is walking her crew of three to school, hiking the Grand Canyon, or giving that certain je-ne-sais-quoi to a model during a shoot for The ODells clothing line, Laura has polish and presence of mind in spades. So imagine how refreshing it was to discover that she also has several how-to-get-through tricks up her sleeve. Laura’s parenting cheat sheet, if you will, that makes any mama look cool: Accept help. When in doubt, plan ahead. Use your Ergo.

Where and when did you first get your Ergobaby carrier?

It was for my baby shower when I was pregnant with Shaun, my oldest. A friend recommended the Ergo and was like, “You have to put this on your registry.” So I did. Then, when Shaun was born, he was super colicky and the Ergo was the one thing that soothed him. I would put him in the Ergo—his witching hour was 6 pm—and I would hit the streets. So yeah, that was the first time I ever experienced the Ergo.

How long have you used your Ergo and through how many kids?

I love that an Ergo was the thing you had to get every time.

Oh yeah. It was like, “Gotta get the Ergo!” I used my Ergo literally all the time because all three of my kids never wanted to be in the stroller, they always just wanted to be on my body. So the Ergo was a lifesaver. 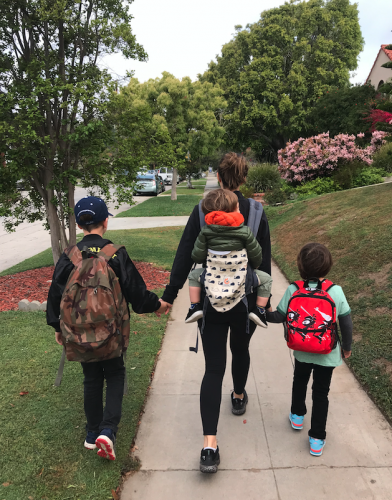 How old are your kids now?

Where have you and your family gone in your Ergo?

One of the most adventurous things that we did with Shaun and the Ergo was a trip to Moab. At that time, we had a big outfitted Jeep that we used for a lot of off-roading adventures. So we did an off-roading trip to Moab, and we brought the Ergo. With Layla, we did the Grand Canyon, but again we had that Jeep so we did a sort of off-road, camping version of the Grand Canyon. I used the Ergo as a backpack for that one, hiking with Layla. And then with Ian, we went to Hawaii and last year, to Italy.

One of my favorite memories was with one of my girlfriends. I was the first of my four girlfriends to have kids, so [when Shaun was born] all of my girlfriends would come over. They didn’t have families to take care of, so they would come over and hang out. So this one time my friend Fatima came and she was like, “How can I help you? What do you need?” You know how everyone’s always offering help when you have a newborn. And I was like, “Honestly, take Shaun in the Ergo and go for a long walk. I’m just going to lay down on the couch and have some alone time.” So she ended up wearing the Ergo, and she took a walk. And I remember, when she came back, she was like, “It scared me because Shaun was so close to my body and he stopped crying and at one point I looked down and I was like, ‘I hope he’s alive!’” [Laughs] She’s like, “Because he was so cozy and tight in there.” So yeah, that’s probably one of my favorite memories, just giving my Ergo to a friend and saying, “Go for a long walk!”

“I’m here to be your personal assistant?” [Laughs] Oh gosh, the Ergo’s just been such a lifesaver I feel like it would say, “Use me! I’m here to help you!”

Two out of my three kids used pacifiers; we called them shi-shis. So if I was going to go for a long walk, I would take a diaper, a little pack of wipes and shi-shis. I love that little pouch; it’s so helpful.

It makes me feel like I can accomplish so much more because I have my hands available, which I think is so awesome. You feel like you’re free. 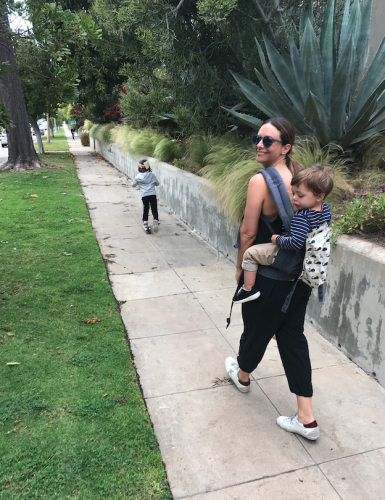 Get as much help as you can. So many people offer help when you have a new baby, and you might be reluctant to say, “Ok, yes! I need help!” But do it. Just say yes to all the offers, whether it’s having a friend deliver a meal or go for a walk with the baby or help you with laundry or whatever. Because after a month’s time, people stop offering because they’re like, “Ah, they got this.”

My oldest and my middle, they bicker all the time. It’s not that they’re actually fighting, they’re just like, “He’s doing this…” Little bickery moments. So for me the biggest joy is when all three are together and happy and having fun with one another. Then the jobs…honestly, it’s when my husband Jason is out of town, like he’s out of town for this whole week. And for me, it’s hard to wrangle all three and to come home and have to get dinner on the table and help Shaun and Layla with homework. You’re always on. Like the moment I get to lie down after they go to bed—usually around 8:30—I’m so exhausted. I’m like, Yeah, I’m going to go to bed, too. [Laughing] Like, There’s nothing more I could do. So I feel like the job would be the constant hustle, you know? When your kids are around, there’s never a moment to just chill. My husband and I joke, the only time we’re able to talk to each other is when we’re at work [Laura and Jason are co-founders of The ODells line and shop] or we go on a date night. Cause if the kids are around and we try to have a conversation, they keep interrupting or we’re having to tell them to stop bickering or something. It’s just a constant hustle.

My younger daughter started kindergarten this year and my husband and I had similar moments of realization. Like oh, we can actually sit and have lunch together even if it’s just in our kitchen…

And it’s quiet and you’re like, Whoa, this is amazing!

Do you have strategies to keep yourself going during weeks like this when Jason is away?

Yeah, I try to keep to a schedule and be really organized. Because obviously with three kids I’m completely outnumbered, so when I come home and there’s so much to be done, if I keep them on a schedule things run a lot smoother. I just have to make sure that for that week, I have dinners queued up, like I know when I come home what I’m going to do. It’s not just a free-for-all, look-in-the-fridge kind of thing. Same with waking up in the morning; there’s no sleeping in. It’s like, Ok, gotta get up, gotta make the lunches, gotta get breakfast going. I feel very militant. [Laughs]

Where will your last Ergo go to retire?

I feel like it’s such a special thing, so if I could pass it on to a girlfriend who’s having a baby, that would be amazing.

I guess it’s actually four words, but: life on the go. When you have your hands available, you are doing things!