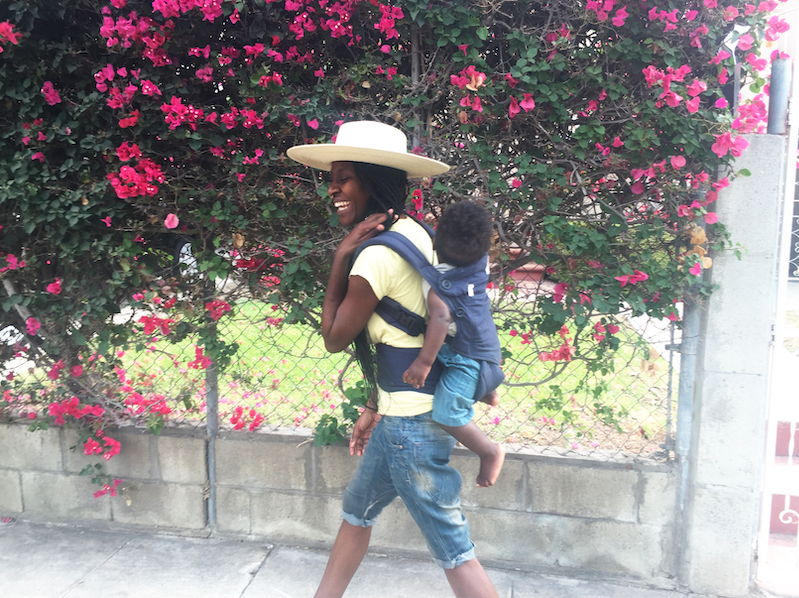 2 parents; 3 boys; all the record stores (and grocery stores and mountains); 1 favorite carrier

Right from hello, it’s clear that Brandi Sellers-Jackson is a master juggler. “I’m just feeding a baby,” she tells me when I phone, “and putting some clothes in the dryer, so I don’t forget they’re there…” The Los Angeles-based mama and doula is also on call for a friend’s birth and flying solo with her three boys (Jax, 13, Jedi, 4, and Jupiter, 1) while her husband’s on tour overseas. And as she talks about Ergobaby, parenting and how she pulls off all this, I do my best to soak up her sparkle and calm.

So I got my Ergo…ooh, almost four years ago because Jedi, our middle child, was around 7 months old. I think it was Dani [Hampton] who reached out to me via social media and was like, “We’d love to send you an Ergo!” And it was timely because I had just pulled my back. So when Dani reached out, I was like, “Yes! Thank you!” So that started our relationship together.

It was so comfortable. I loved slings and I loved wraps, but sometimes you just don’t feel like wrapping and tying and doing all that stuff, so I loved that I could put Jedi in the carrier and keep him moving and it was super easy to navigate.

Do you use the same Ergo with Jupiter now?

I do! Granted, I do a lot of brand ambassador work with Ergo, so I have all the carriers. But I still love using the first 360 that I got with Jedi for Jupiter.

Where are some of the places you guys go with your Ergo?

Do you have a favorite Ergo memory?

My first memory is doing Record Store Day in our Ergo. We went to Amoeba Records and then to a few independent record stores. It was a lot of walking and I had Jedi strapped to me and I loved it. I feel like the Ergo has become such an integral part of our lives; it’s hard to pinpoint one specific memory because we use it all the time.

Probably, “You got this. You can do this. You go, Mom.” The things that I have done in my Ergo are hilarious, just with all the multitasking. I mean, I fricking climbed a mountain while breastfeeding in my Ergo! Like, if you let that sink in, that’s pretty—excuse my language—badass. [Laughs] And I think that’s what Ergo does: It empowers a lot of parents to keep going about their lives and to feel like they don’t have to pause who they are and what they want to do. So yeah, I think that’s what the Ergo says to me: “You got this and you’re amazing and you’re badass and you can do all the things and probably even more now.”

Fill in the blank: I always have _____ in the carrier’s storage pouch.

You know what? Probably I put wipes in there, maybe hand sanitizer. Because kids, man. And when you have three boys, you don’t know what they’re touching. The other day, my youngest, Jupiter…I called our pediatrician frantic, but I think he might have eaten poo. He might have. It was like a blowout diaper and I was doing emails and I look up and I’m, like, “Wait, what are you doing? Wait a minute.” And I love our pediatrician because he’s so not an alarmist, he was like, “He’s fine, it’s ok.” And he also gave me the scientific term for eating poo, and I was like, “Thanks for that.” I was, like, “Great, thanks.”

[Laughing] There is, there is. So yeah, hand sanitizer all day. Or baby wipes.

Probably the power to do anything. To continue. To keep going. There’s doesn’t have to be a pause unless you want one. And if you want to pause, you can. 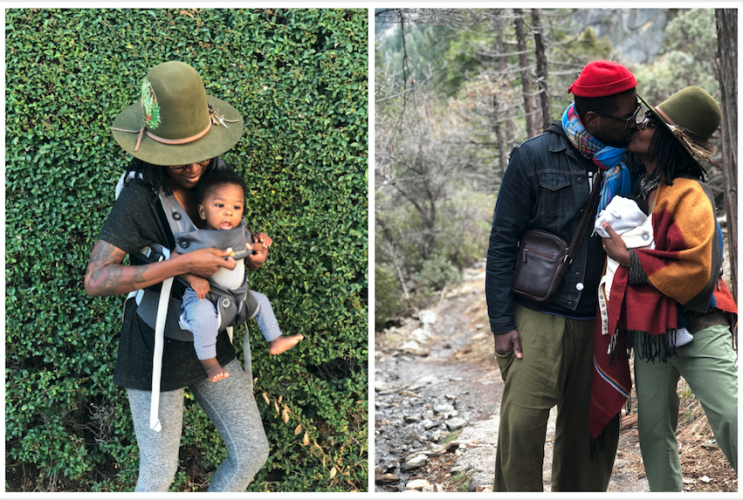 What advice do you have for a new mom or dad?

The short version is: Make sure you have your village in tow. I can’t stress it enough. And have that support in place for at least a year. I’m not talking about hiring a postpartum doula necessarily, but your friends, those people who reach out to you and are like, “If you need anything, let me know.” Those are the people you actually reach out to and let them know. A lot of times, we don’t take advantage of that help and end up feeling stressed and overwhelmed. It shouldn’t be like that. Even if you’ve got one friend who’s like, “Hey, I can do Grubhub or Postmates for you,” let them do it. Let them do it.

Can you talk about the joys and jobs of parenting for you?

The joys are I love raising boys. They’re awesome. I love that I get to raise boys and men who are going to be kind and wonderful and aware and all those things. Even with our oldest son, I did the period talk at his school and that was great. I love that when they’re older, Jax won’t be one of those men who talks about periods as if it’s, like, the plague. The job of it is, also, that they are boys. [Laughs] And they’re getting older, you know? With the younger kids, I’ve been through teething; I’ve been through bumps and bruises. But with Jax, it’s a different road. Everything that he’s doing, I’ve never done before. So just like I read books when they were babies, now I’m reading books on pre-teens and how their brains are developing. And I’m learning all the ways that I can better support him. I’m having to hold space for Jax in the same way that I have to hold space for my toddler or my baby who’s teething. The holding space, the homework is the job.

When Jupiter is big and it’s time to retire your Ergo, where will it go?

There are certain things that I’ve given away when the kids outgrow them, but there are some things I want to save, maybe for their children. I’m definitely going to save our carriers. They’ll go in the treasure box of things.

Fall Back: 2 Surprisingly Simple Plans to Prepare for Baby’s Sleep