Babywearing Can Help You Meet Your Breastfeeding Goals 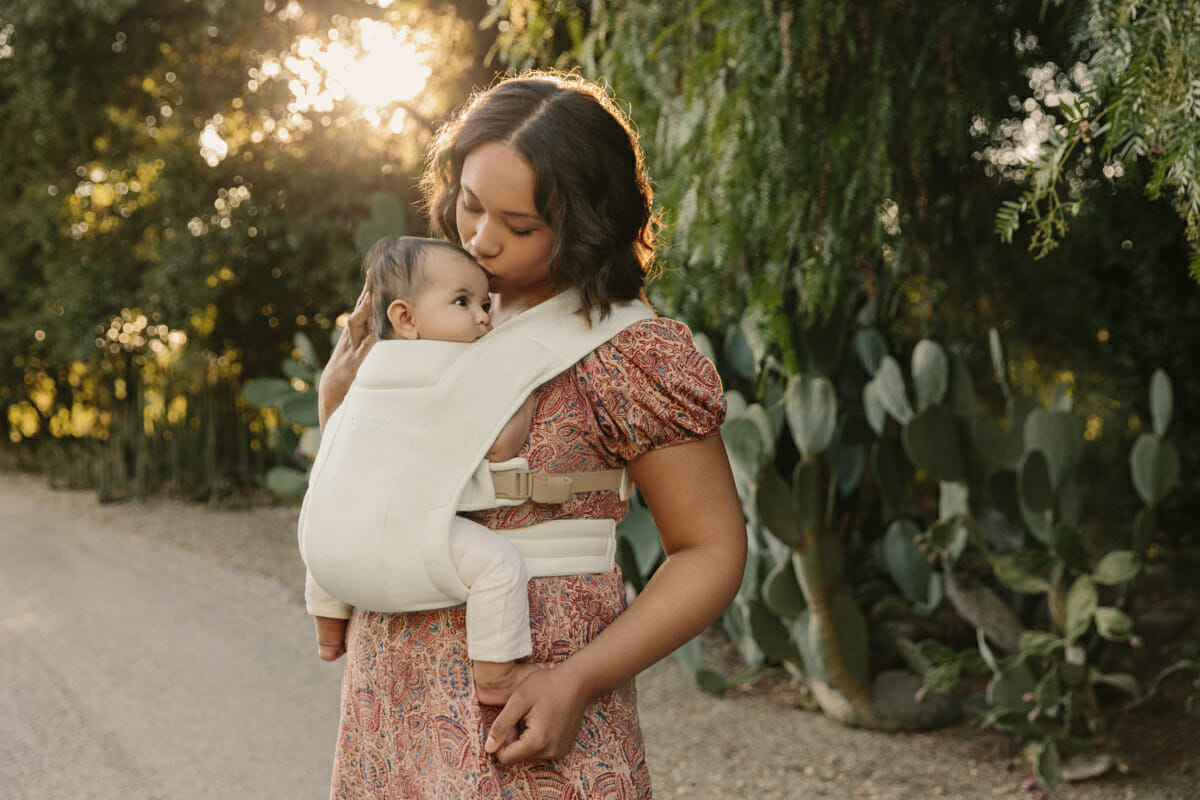 Parents around the world intuitively understand the vast benefits that come with the close physical contact facilitated by babywearing. Yet there are only a handful of scientific studies investigating the effect of infant carrying on health and developmental outcomes. In partnership with a team of researchers and community health professionals from Project Concern International, University of California Merced, University of Texas at Austin, and University of Oregon, Nurturely published results from a study testing the effect of infant carriers on breastfeeding outcomes. The study – published on June 30th in the peer-reviewed journal Pediatrics – adds new scientific evidence to the small but growing body of research seeking to understand and document how the practice of infant carrying benefits parents and babies. Keep reading for a summary of the research study demonstrating (spoiler alert): providing infant carriers to pregnant parents significantly improved breastfeeding outcomes at six months postpartum.

It is well established that parent-infant skin-to-skin contact immediately after birth increases initiation and duration of breastfeeding, but less is known about whether infant carrying throughout the first six months (without direct skin-to-skin contact) facilitates increased breastfeeding. It makes sense that some of the benefits of skin-to-skin contact would translate to carrying, but we cannot be sure because only a few studies have directly tested the effects of carrying. We wanted to test whether providing infant carriers to parents before birth would increase the likelihood of breastfeeding at six months postpartum. For the purposes of this study, we defined breastfeeding as direct feeding at the chest and/or feeding expressed human milk. We were interested in partial and exclusive breastfeeding and expressed human milk feeding at six months (both clinical milestones, given that the WHO recommends exclusive human milk feeding for the first six months of life), as well as the frequency of feeding directly at the breast/chest.

Nurturely partnered with a home visiting program for pregnant and postpartum parents to implement an intervention with infant carriers. At 30 weeks gestation, 50 parents were given ergonomic infant carriers with instructions on how to use the carriers and encouragement to use the carriers as much as possible with their baby. The other 50 parents were assigned to a waitlist control group, meaning that they received the same infant carrier but did not receive it until after the first six months postpartum (after all data had been collected). Parents filled out electronic surveys at several timepoints to assess how they were feeding their baby. All methods used in this intervention – including how we provided babywearing education and the questions and format we used to solicit survey responses from participants – were designed in partnership with representatives from the community that participates in the home visiting program to ensure that methods were culturally-responsive and participant-centered.

Randomized Controlled Trial – what does it mean?

It’s important to note that this was a randomized controlled trial, which is one of the most rigorous forms of scientific testing. In this type of experimental design, researchers randomly assign some of the people in a study to receive the intervention (in this case, babywearing was the intervention) and some to be in the control group. Using a random number generator or other method to randomly choose who is in the intervention group versus who is in the control group prevents confounding factors from affecting the results. For example, many correlational studies have shown that parents who use infant carriers are more likely to feed human milk for longer, but these studies do not rule out the very likely possibility that the beliefs that motivate some parents to use carriers also motivate them to breastfeed. There are also rampant inequities in who has access to both baby carriers and support for breastfeeding, often creating a situation where only the parents with financial and social privilege are able to get the needed support for breast/chestfeeding and those are also the parents who are able to afford to spend time in close physical contact with their baby.

How did the intervention affect breastfeeding?

Parents in the intervention group were more likely to be breastfeeding or feeding expressed human milk at 6 months (68%) than control group parents (40%). We did not find a statistically significant difference in exclusive breastfeeding, although more parents were exclusively breastfeeding in the intervention group (49%) than the control group (26%). We also didn’t see an effect of the intervention on frequency of direct breast/chestfeeding, but we predict that our sample size of only 100 participants was too small to be able to detect an effect. Although breastfeeding is very complex and there are many factors that lead some parents to breastfeed for longer, the randomized design allowed us to rule out confounding factors. We can confidently say that being given an infant carrier during pregnancy increased the likelihood of breastfeeding at six months postpartum. Nurturely will be continuing this line of research with larger scale interventions, but even this small study has exciting implications for shaping the future of preventative wellness and support policies for parents. Stay tuned for the next posts in this series addressing the motivation behind this research, including the cultural roots of infant carrying, the potential reasons that babywearing increases breastfeeding, and the clinical and policy implications of this work.

Acknowledgements: We appreciate the support of Ergobaby who donated the carriers used in this study.

About the author: Emily Little, PhD, CLEC, is a perinatal health educator, researcher, and advocate, and is the Founder and Executive Director of Nurturely (nurturely.org). Emily conducts community-participatory research that combines approaches from anthropology, psychology, and public health to explore infant-caregiver interaction and perinatal health systems, with the end goal of improving policies and societal practices so all infants and caregivers can thrive. She is trained as a Certified Lactation Educator Counselor and is passionate about co-creating preventative, community-led programs that facilitate equitable access to wellness during the perinatal period. Her work in Micronesia, Central and South America, and South Asia inspired her passion for strengthening cultures of support for infants and caregivers and promoting equity in all aspects of her work.

We Want to Hear from You!