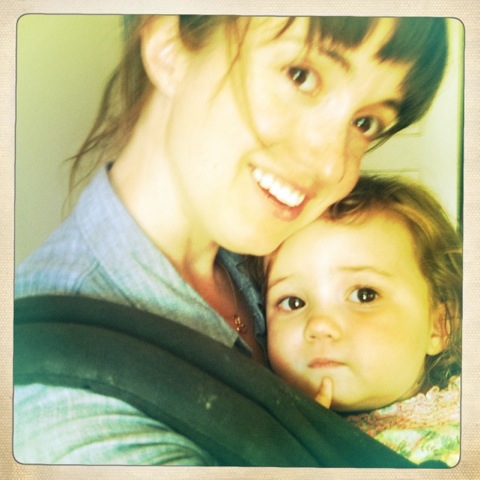 Here are what long flights and car rides used to mean: Quiet time. Daydreaming time. I’d make sure I had a good playlist on my iPod, a water bottle, gum.

And then I had a baby.

Here are what long flights and car rides mean now: A vaudeville show. Step right up, babies and gents, we’ve got jugglers and funny face-makers, song singers and snack givers, a strong man who can hold a baby in one arm and walk up and down the aisle not one, not two, but 15 times for your amusement. A fortune-teller who knows exactly what happens at the end of Where’s Spot? For a 2-year-old and her parents, it’s laugh and the world laughs with you, cry and “Are we there yet?” takes on a whole new urgency.

Sadie’s first road trip happened when she was two weeks old (a four-hour drive for a family beach vacation). She first went on a plane at 6 weeks. And both times, I steeled my nerves for whatever was to come. Have baby, will travel, onward and upward. Or something.

Except… there was remarkably little to steel myself against on either adventure. Or on another road trip a month later to celebrate a friend’s 30th birthday. Or a few months after that when we flew across the country from New York to LA.

Which I still feel grateful for even as I write about it now. And which I attribute to two things: 1) Little babies sleep a lot. And 2) Ergos make traveling with little babies ever so much simpler.

Boarding that very first, with-baby flight, Sadie was in the Ergo while we were on the flight.  (We were using the Original Carrier with the Infant Insert then) because she was often in the Ergo. While in the airport before boarding, it kept my hands free to carry bags. She fell asleep there. The flight attendants asked us to take Sadie out of the baby carrier as soon as we began moving, but happily she stayed asleep.  I took her off again for landing.

The safest place for baby is in a car seat on a plane.  While if you bring your baby as a “lap-baby” and don’t buy her a seat, the use of baby carriers is not allowed during flight travel during take off and landing. According to the FAA: “While booster seats and harness vests enhance safety in vehicles, the FAA prohibits passengers from using these types of restraints on airplanes.” The representative I interviewed said that Ergos would most likely be considered harness vests. He also sent me a link for the applicable FAA regulations, which underline the issue even more strongly: They state that vest- and harness-type child restraint systems are not approved for use in aircraft period.

Sadie slept for almost the entire flight. I read, I sipped my club soda, I dozed. It was a lot like what plane rides had always meant. When Sadie woke up, she was happy. Her dad and I were happy. She looked out the window. Had a snack. Practiced her comedy routine on the flight attendants. Back into the Ergo she went when we got off the plane. Somewhere between Concourses B and C in the Dallas airport, she felt another nap coming on. And so, much to our delight, we continued on our merry way.

Even now that Sadie’s gotten older, the Ergo is still the best way to negotiate busy terminals with bags. On road trips, it’s still perfect for a little mid-journey sightseeing. In fact, when we decided to move across the country earlier this year, we sent our stroller on with the movers. Our Ergo came with us in the car.

These days, though it’s not quite as peaceful as it once was, Sadie continues to be an intrepid traveler. We recently returned from a trip to New Mexico for her second birthday. Later this summer, we’re off to Salt Lake for a wedding and to Seattle to visit friends. So if you hear a commotion back in row 21, rest assured it’s nothing to worry about. It’s just the jugglers beginning the show. Away we go.