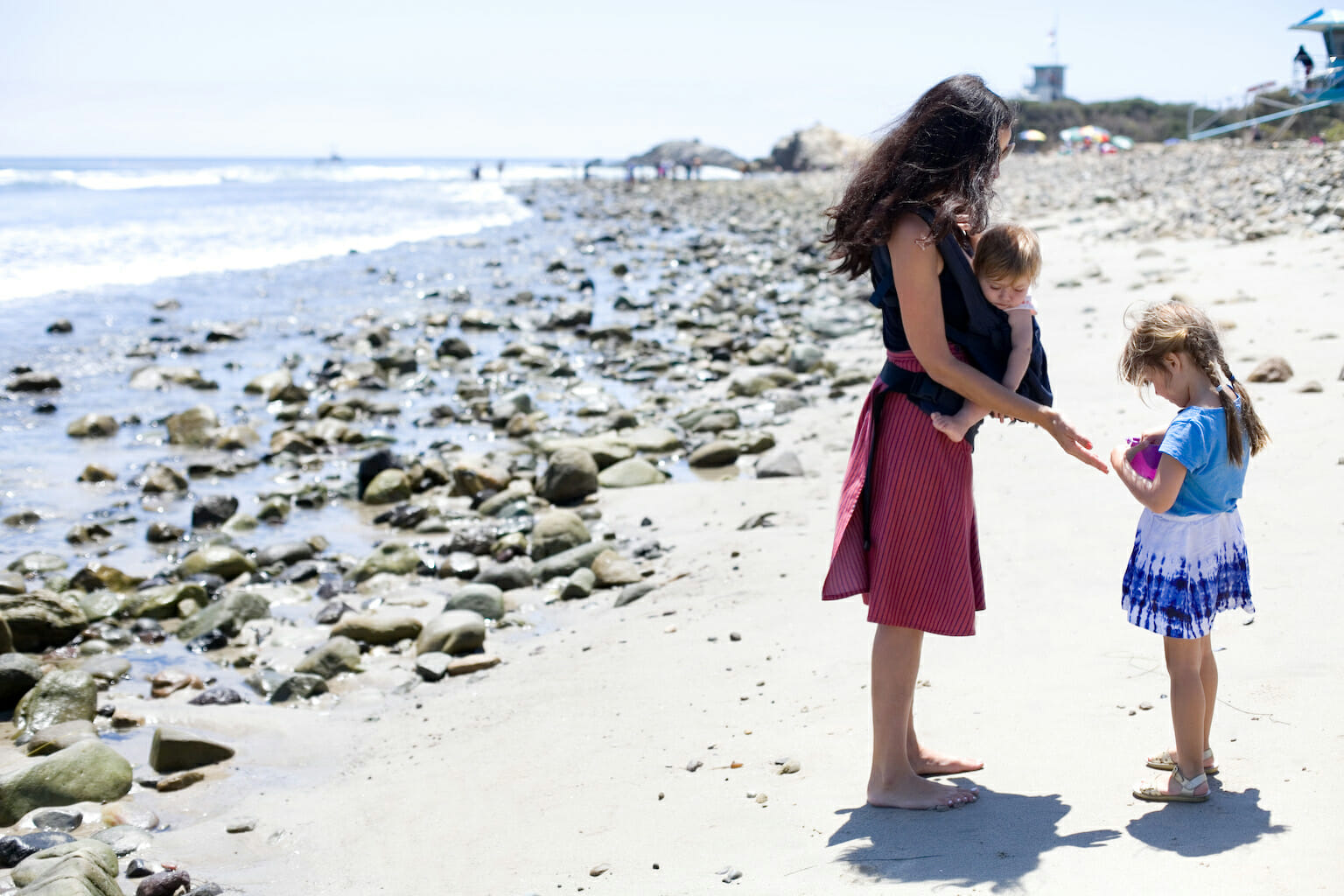 I have a confession to make: Elizabeth Antonia’s Stories on Instagram are my moments of Zen. They’re nothing fancy, just pieces of a day: delicately filtered snapshots of her daughters (Elodie, 10, and Francesca, 6), a bowl of just-picked mulberries. But the images’ glowing simplicity has a peace you can practically breathe in. You might know Elizabeth as author of the blog, The Littlest. And now she has a book, Early Riser Companion, to add to her credits. When I caught up with her, she was taking a walk break from work on her book. And as we talked, it was easy to see that a vital tool in bringing her pared-down, connected way of life into motherhood was, you guessed it, her Ergo.

In 2009, so 10 years ago. Crazy! I think it came from the Pump Station, here in LA. And it was not a fancy one. It was black, more rudimentary in terms of fabric, and it was my favorite carrier, hands down. I wore Elodie everywhere.

And you wore it with your second daughter, too?

Yeah, that was 2012. And then I started working for Ergo as Creative Director in 2014. I probably eventually had, like, five Ergos or something.

Were there ones you wore more than others?

The ones I loved the most were an organic navy one and a winter white one. I liked the solid colors. And I had a Liberty print Ergo; I loved that one, too. 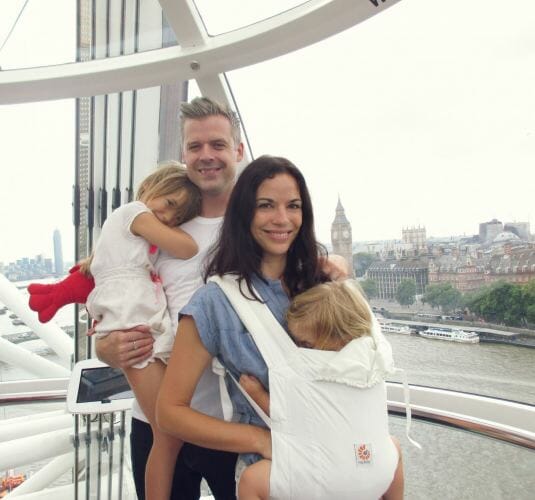 Where did you and your family go with your Ergos?

Huntington Gardens. Malibu. The Getty Museum. Trails Café. Hiking up to Griffith Park Observatory. Descanso Gardens. I have pictures in Red Rocks, Las Vegas with my oldest. A lot of plane travel. All over.

I went back to work when my oldest was 4 months old, and so the reason why I loved the Ergo so much was being able to have that connection with her when I wasn’t at work. I’d come home and we’d have dinner, and then I’d take Elodie for a walk in the neighborhood. It was a really tender feeling for me, carrying her and just knowing at the end of the day that she could hear my heart beat, hear my voice and my songs, and just feel that connection.

I totally get that. We lived in New York for the first year after my oldest was born. I would pick her up from day care, and we would ride home on the subway together, with her in the Ergo. It felt so good to have her snuggled up with me.

Exactly. I think it’s such a tender thing for women who are working. It just really made me appreciate her so much having to leave her. And you feel so much guilt, but at the end of the day, we all have to do what we have to do. The Ergo was such a good tool for establishing that ‘you and me’ moment.

I think it would say, “Thanks for not giving up on me.” Because I think a lot of people will use it one time and be like, “Oh, it didn’t work, they got fussy.” It’s a huge lesson in parenting, actually. Sometimes we try things once or twice and the reaction is so strong, and we don’t try again. And you know, I’m sure I had some of those moments where Elodie didn’t want to be in the Ergo, but overall, our experience was so amazing. It was a powerful tool of connection those first years, and if I had given up on it, I would have missed out on literally years of having it help me. 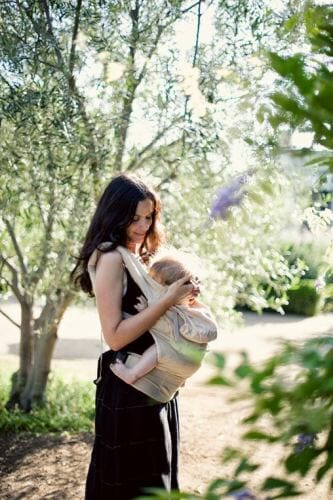 As a new mom, we do have mom brain. [Laughs] So it’s like, I don’t want anything or anyone to make me crazier than I already am; I’m just trying to keep myself organized. So the Ergo gave me the superpower of organization. I could carry things in it. I felt free because I didn’t have to have a clunky stroller. I don’t like a lot of things holding me down. So with the Ergo, I was able to be like, I have my child, I have my keys, and I’m out. I can go anywhere because my kid’s here, she’s safe, she’s good. I’ve handled it.

My phone in Airplane Mode, keys, and lunch money. It’s still the same thing. Right now, I have my phone, my keys, my lunch money. [Laughs]

To be honest, my number one tip would be to stay off of social media. Time pours through our fingers and just the idea that we would go out of our way to protect our young children from messages that we so readily take in on the consumer and the comparison level…. We are doing ourselves a great disservice to have that anxiety and unease living in our bodies, while we are in the cocoon of this really sacred time. People talk about the first 40 days [after having a baby] in terms of, if you don’t really respect your space, take care of your body, and rest during that time, then you will be sicker within a year. But we also need to set healthy boundaries in regards to exposure to our phone. 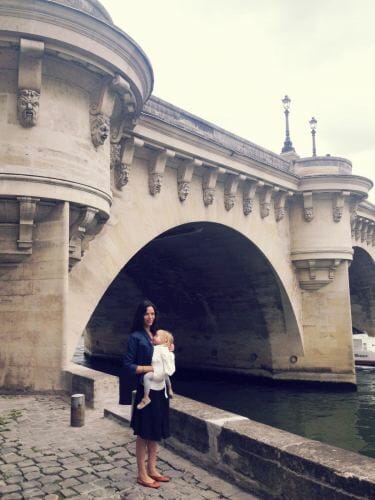 It’s a time that feels chaotic anyway, so yes, it makes sense to turn off any additional chaos that you don’t need.

Yeah, and you’re not missing anything. Everything you need is right with you. I think I had an iPhone when Elodie was a baby, but I didn’t have Facebook at the time. I’m grateful for that. And I totally regret having the phone on with Frankie. Unfortunately, we’re all susceptible. It’s natural. And it’s just a bad habit; it’s not that serious. It’s about retraining our mind. We are such strong creators; we can do whatever we want.

Tell us about your parenting joys and jobs.

I really struggle with the domestic side of parenting: packing lunches, getting groceries, cleaning the house. Those tasks feel thankless and tedious at times. So I have tried to rephrase all that to being home care versus chores. That when I’m cleaning a room—and I try to share this with the girls—that we are clearing the space not just to clean it, but also to clear the way for new energy and magic. It helps me feel like it’s more special than it might really be.

The places that bring me joy are watching the girls grow, seeing them find what they gravitate to, and just listening to them and following them rather than guiding the way. It’s been a process over these years, understanding the importance of that. The girls just need to feel my presence, but I don’t have to be putting my beliefs or opinions on them. I’m not always good at it; it’s a practice. [Laughs]

Where is your Ergo these days?

All my wonderful friends who are having babies have my Ergos. They will be returning them to me, so I can pass them on to people I love. Two of them are with my nieces.

I like that the carriers come back to you, so they can have more lives.

Yeah, I’m all about hand me downs and sharing. There’s only one that I really want back to keep: the Liberty one because I love it. I’m going to save that one for the girls.

12 Things to Add to Your Baby’s Summer Bucket List